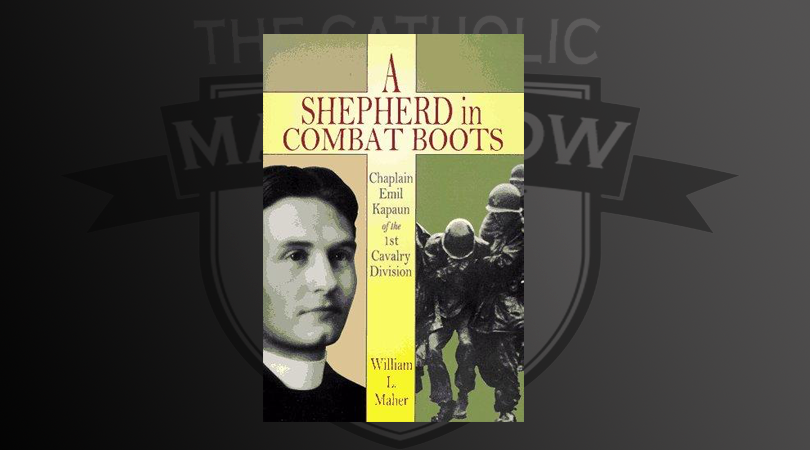 I am not sure when I first heard of Pilsen, KS, but it was likely during a game of triple solitaire with my wife and her grandmother here in Oklahoma. My wife’s grandmother had relatives in Pilsen, KS, and would tell us about her travels to that small Kansas town. At the time of her stories, I had never heard of Chaplain Emil Kapaun. Just a few short years after first hearing of Pilsen, my wife and I, along with our very young daughter (she leaves for college this week, brief pause for a manly swallow of the lump in my throat) found ourselves in the cemetery behind the Catholic Church in Pilsen looking for the graves of relatives over Memorial Day weekend. At that point in time, I still did not know anything about Chaplain Kapaun, especially that he was not only a fine, holy servant of God but also that he was from Pilsen, KS.

Moving forward a few more years and a few children later our family arrived at the Midwest Catholic Family Conference in Wichita, KS, and happened upon the Father Kapaun booth, and that is when all the dots started connecting. I learned that his hometown was Pilsen and quickly discovered the courage and bravery he exhibited during the Korean War. Reading the story of Father Kapaun’s life has not only been a personal, reflective journey for me but has opened my eyes to the importance of self-sacrifice and being present when there is nothing else you can give.

This biography about Chaplain Kapaun is easy to read and captures the essence of a joyful and hardworking priest from Pilsen, KS. He was raised on a farm, which included occasional leisure time as a boy for fishing, swimming, and ice skating while fostering his prowess for working without tire, which served him well as he cared for “his boys” during the Korean War. One parishioner from Kansas describes Chaplain Kapaun as a man’s man. He was often heavily involved in manual labor while pastoring his parishes, and once worked 6 months straight without a day off. Chaplain Kapaun was known to enjoy cigars and pipes. On one occasion during the war, he was crawling to assist the wounded, and a bullet barely missed him but was close enough to break his pipe.

I think what stands out the most from this story is Chaplain Kapaun’s selfless bravery in service to the men under his care during the Korean War. He allowed himself to be captured so he could be with and care for the wounded soldiers. Being a prisoner of war brought many hardships for the soldiers in Korea which included: bitter cold weather during their 20 mile walks at night on their way to the prison camp, a diet that consisted of little to no food and water once daily, rampant health ailments that could have been treated with proper medicine, and scant shelter that was inadequate for the 40 below zero temperatures that the POWs faced. Yet, through all of this suffering, his men remembered Chaplain Kapaun as someone who never complained and always looked for a way to help someone else (even though he was battling an eye infection and leg injury).

With each page, I learned how much his fellow prisoners thought of him and how he was able to keep their spirits high. Chaplain Kapaun risked his life by sneaking out at night in the prison camp to scrounge for food. He kept routine by bringing the men hot water in the morning and pretending it was coffee and helped to clean the dirty clothing of the ill prisoners, but what inspired the men the most was the quick visits he would make with them to offer a prayer. The book notes that 15 people converted to the faith by the example of how Chaplain Kapaun lived.

Chaplain Kapaun was also fearless and ignored warnings from the guards to stop praying. His style of service to his men frustrated the communist prison guards and left them baffled as to how to deal with him. When Chaplain Kapaun became ill with pneumonia, the prison camp officials seized the opportunity to rid themselves of his influence and sent him to the camp “hospital” which was known as the dying place. In less than 2 months after celebrating Easter in the prison camp, Chaplain Kapaun died on May 23, 1951.

Trying to summarize the story of Chaplain Kapaun is difficult because he did so many things in his lifetime. It does not surprise me that Chaplain Kapaun was born on Holy Thursday, which, as the book points out, is a day that commemorates the ordination of the first Catholic priests. Holy Thursday is also a day where we see our priests washing the feet of their parish families in an act of selfless service. After reading his story and reflecting a bit, I see clearly that Chaplain Kapaun based his life on service, putting his needs far behind the needs of others. In addition, he shows us an excellent example of Christian life and death. As a friend recalls just before Chaplain Kapaun was taken to the “hospital” he told his friend the following: “Don’t take it so hard Mike, I’m going where I’ve always wanted to go. And when I get up there I’ll say a prayer for all of you.” It seems to me the summit of our Christian life would be to live in such a way so that we can say the same at the time of our death. Chaplain Emil Kapaun, pray for us!

Husband and fortunate father of four