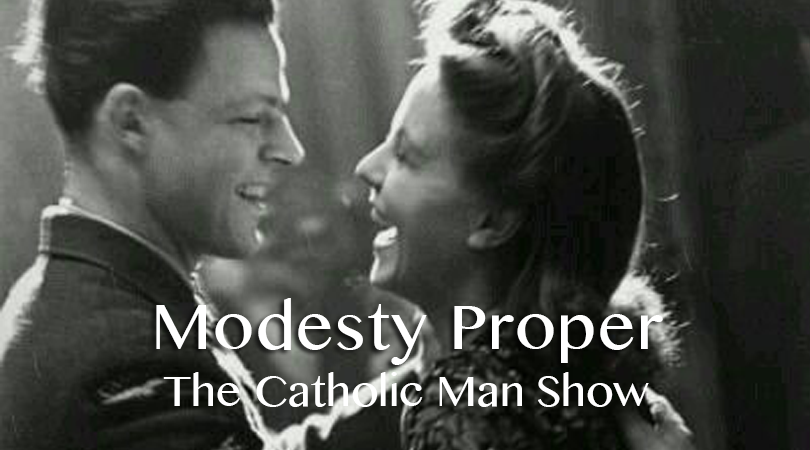 We may be deceived, especially in our day and age, to believe this present world has all but forfeited modesty. And why shouldn’t we believe this? It seems almost every time we turn on our televisions we are bombarded with lustful entertainment or saturated with inappropriate scenes laced with violence and foul language. We may even see young people in the marketplaces wearing sagging or ripped clothing showing off large portions of their flesh to the public as if this was normal. So should we believe that modesty has been abandoned? I will tell you… We cannot afford to succumb to the option that modesty is lost among all people for the sake of the war at hand. Now, what could I mean when I say that, ‘for the sake of the war at hand’? Are we not at war with powers and principalities as St. Paul told us? Do we not have a stake in this battle? Is not our eternal destiny either heaven or hell? Then yes, this is a war and we are in it – it is the war for the hearts and minds of all mankind for the destiny of our souls.

We cannot afford to succumb to the option that modesty is lost to us in the same way that our armed forces cannot give up parts of our country to our enemies. Shall it be so that just because we see an army of disillusioned young men and women waving Communist flags that we should allow Communism to take hold and root itself there? No, of course not! So why should we say that modesty is lost to us? So then, if not lost, then what do we see before us? Brothers, we see a perversion of modesty. An inversion of purity that pervades the heart of the family seeking to bring to ruin sacred gifts such as virginity and innocence. The outward manifestation of the condition of our souls, at least these days, can be seen by how we present ourselves physically. Respect and due reverence for the body have all but fled from the minds of those who so naively step out into a dangerous and unmerciful world. A great deal of misunderstanding of modesty is that we have lost the concept of what we are – we are temples of the Holy Spirit and therefore precious in the sight of God. Therefore fathers and husbands, speak to your wives and children of their preciousness to both God and you. There is a reason God has shared his title of ‘Father’ with the likes of men: it is so our family might see an image of God the Father among them. We are in every way to resemble Christ so as to move others to follow Christ; this is even more so in the family. To be men of integrity is synonymous with being Catholic and to be modest is a direct effect of following Christ.

Recall in the Book of Acts, that when St. Peter was on his way to pray – his shadow fell on those that were sick and not sooner did St. Peter’s shadow leave him were they healed. What this tells me is whatever you hold within you, surely will radiate out to others. Shall it be Godliness like St. Peter or shall it be empty like Judas? But do not be discouraged that you are unable to reach even those of your own family that modesty is the practice of perfection. Instead, use fewer words more far more actions when it comes to teaching. Be a witness of modesty both you and your wife for the cause of sanctifying your children. Or if it be that you are a single father, then you yourself witness this most excellent truth of bodily purity. Do not give hopelessness provisions to gain momentum against you but rather steadfastly oppose this vice against innocence and be counter-revolutionary. Go against the grain and do not follow this world that seeks pleasure, comfort, and numbness but instead integrity, hard-work, and charity. Be the temple of God you were built to be and prayerfully be adorned in what God desires. For your audience is not your neighbor, but God, the angels, and saints!

← Importance of DevotionsLead us not into temptation →