HOW DID JESUS DIE?

The Anatomical And Physiological Details Of Death By Crucifixion:
By Dr. C. Truman Davis
A Physician Analyzes the Crucifixion.
From New Wine Magazine, April 1982.
Originally published in Arizona Medicine,
March 1965, Arizona Medical Association.
How Jesus Died For You 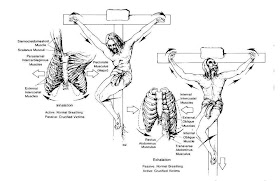 Crucifixion was invented by the Persians in 300 BC, and perfected by the Romans in 100 BC.

Love Him in everything you do!