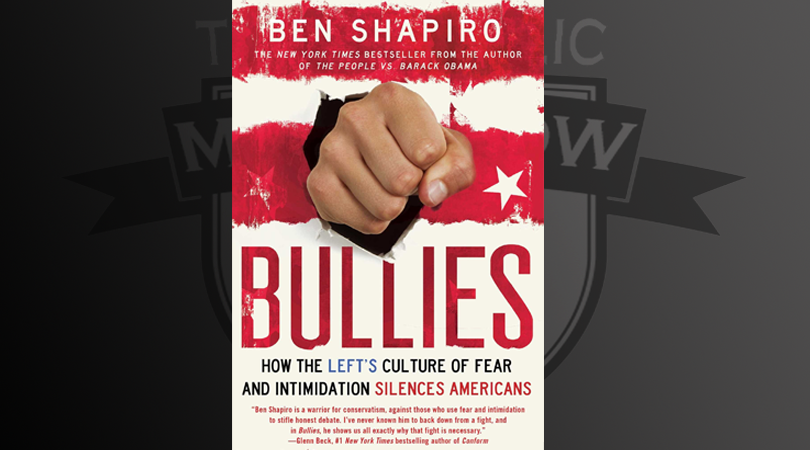 Bullies: How the Left’s Culture of Fear and Intimidation Silences Americans by Ben Shapiro

“America’s founding ideology is the greatest single governing ideology in the history of mankind…” Would you ever say this phrase at a cocktail party? How about at the work water cooler? Doubtful. Do you know why? Perhaps it’s because you’ve been bullied into silence. In Ben Shapiro’s book, Bullies, he outlines six types of bullies and how they attempt to shame people into silence. I will highlight the three main types that I believe pertain particularly to Catholics.

In his book, Shapiro argues that class bullies, or socialists, make war between the classes in order to gain control of the economy. As Catholics, we know that socialism is deeply immoral. Shapiro articulates the reasons why by showing how capitalism helps the poor become rich and the rich become richer. He cites several instances in which class bullies have argued for the redistribution of wealth, which is a common phrase used by socialists. He also shows how socialists have oppressed capitalists by making them feel bad for accumulating wealth. Shapiro is clear and concise in his explanation of both the origins of the class bullies and how they attack today. If you want to find out how to combat them, be sure to read the book.

Catholics, in particular, are prominent victims of sex bullies. Shapiro demonstrates this by writing about examples such as Planned Parenthood and their role in the Susan G. Komen Foundation, as well as LGBTQ activists. Shapiro also points out that feminists, one of the most prominent sex bullies, have undermined the roles of stay-at-home mothers, as well as the inherent differences between men and women. He also discusses how abortion and reproductive rights activists use bullying tactics to strong-arm pro-life people. Shapiro gives several specific examples of how the sex bullies harass pro-lifers and those that support traditional family values, and he provides a stellar defense for the pro-life and pro-family position.

Shapiro notes that religious people are often told that they must use secular language to justify why they vote a certain way. Shapiro shows how the secular bullies want religious people to not vote on issues based on their faith. In other words, they want to make religion obsolete, or at least out of the public square. Catholics in particular have been victims of the secular bullies. Shapiro discusses a particular case in which a woman named Sandra Fluke of Georgetown Law School (which is a Catholic institution) demanded that the school should be forced to pay for her birth control. Shapiro addresses this case and more examples of secular bullies in more detail, but you’ll have to read the book yourself to find out what he says.

In summary, Bullies is a valuable book, and it is also a great resource for anyone that is needing inspiration and encouragement for defending traditional values. This story will open your eyes to the bullying that goes on each day that you might not even notice, and it will give you several great examples and arguments as to how to defend your beliefs and your faith.   After reading this, I became more courageous because I realized how vital it is to stand up for morality and virtue. America is a country that was built on these two ideals, and as Shapiro says, “America’s military has been the greatest fighting force for freedom in world history…America does not require apologizing for, but fighting for.”

Alice Keithly is a student at Oklahoma State University and the daughter of Kent Keithly, a frequent book review writer for “The Catholic Man Show.” Cheers to Jesus!

← Book Review – Never Give In: The Extraordinary Character of Winston ChurchillBook Review: Delivered by Matt Fradd →