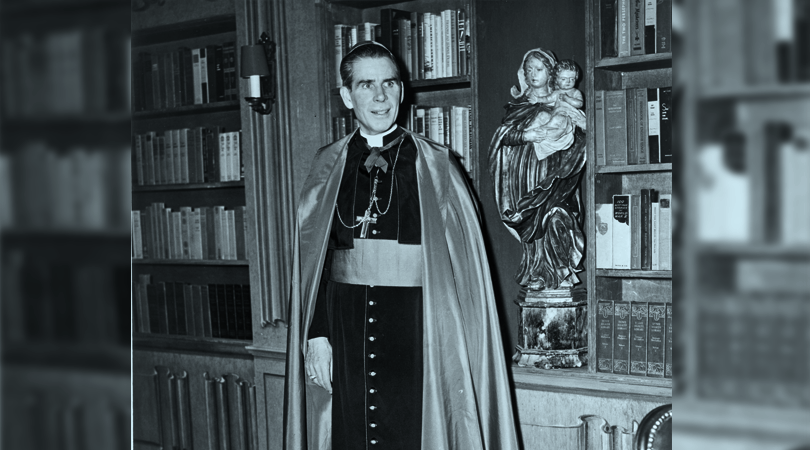 Archbishop Fulton J. Sheen was a master communicator with an unforgettable voice and ability to communicate the message of Christianity to all peoples. He had a way of being very likable and welcoming to all, no matter what your beliefs were. (Continue reading on Wikipedia)

Archbishop Fulton Sheen wrote 66 books, not including numerous booklets and books that were republished with new titles. Here are 13 quotes on a wide variety of topics.

If it be true that the world has lost its respect for authority, it is only because it lost it first in the home.

Home life is the God-appointed training ground of human character, for from the home life of the child springs the maturity of manhood, either for good or for evil.

On Being a Gentleman

The gentleman is the one who is modest and retiring, who waits first on the others and thinks of everyone but himself, and finds his chief happiness in making someone else happy; who, however poor and humble anyone else may be, bears to them the open palm of true nobility.

How the modern world needs a Socrates, who used to walk into the market place of Athens asking people questions in order to make them discover themselves! True, he was put to death for unmasking others, but he left the world the heritage of “know thyself.”

The sincere are those who have an ensemble of virtues, who are equally good at speaking and listening; who have silences, as well as words; who are not opaque like curtains, but transparent like window panes. They speak, knowing that one day they will have to be judged by God.

On a Rocking Chair

The rocking chair, it has been said, is a typical American invention; it enables man to rest as he is restless, to sit in one place and still be on the go.

Poets are those who have been richly endowed with a sense of the invisible, who can look out upon exactly the same phenomena that other mortals take seriously, and see in them something of the Divine.

Politeness is a way of showing externally the internal regard we have for others. Good manners are the shadows cast by virtues.

The modern man has more leisure than the men of a century ago, but he knows less what to do with it.

One cannot imagine the Director of the Tax Bureau of any great city climbing a tree to see a parade, or to catch a glimpse of a visitor, but apparently, Zacchaeus was more humble. When a man begins looking for God, he will soon discover the God is looking for him.

On Jefferson and Lincoln

A Declaration of Dependence, 60

← Need a prayer to clarify what is ambiguous? JP2 has you covered!{Post Category:833}: Intro →