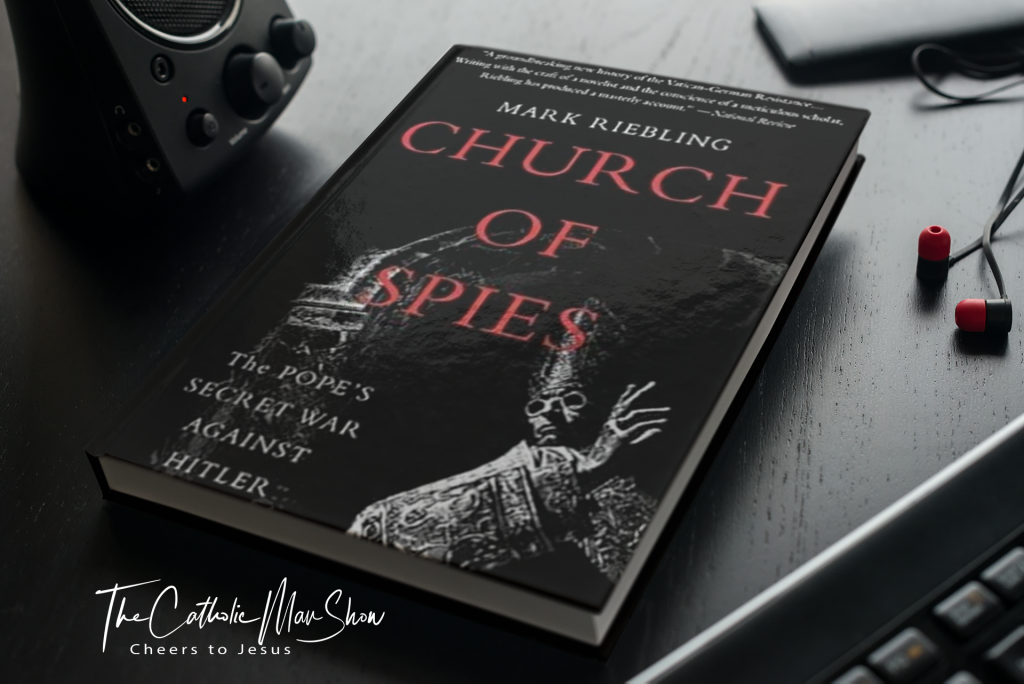 Have I mentioned that historical books are difficult for me to read as I tend to get hung up in dates, times, and places until oftentimes I lose my train of thought? Imagine then how surprised I was when I read this 250-page account, which contains an additional 5 pages of abbreviations, 72 pages of notes to accompany the chapters and epilogue, and 26 pages of sources, by Mr. Riebling and was able to mostly follow the plot and purpose with an emphasis on mostly. Any inability for me to not follow the storyline is not the fault of the author but is all my own.

To say this story reads like an action novel is an understatement and oh how I wish the content was not based on historical facts. This book is an account of a very dark time in the history of our world. In a time when a zeal for reporting both sides of a story seems lacking, completing investigative journalism to find the truth of a matter rather than advancing an agenda appear on holiday, and silencing viewpoints that may not agree with the “mainstream” seems to be the soup of the day I am able to better appreciate the painstaking efforts the author took in order, to tell the truth about Pope Pius the Twelfth and his actions during World War Two. Whether intentional or not, the author through this book reminds readers that history is important and is full of many people who risked their own safety to try and thwart evil.

I remember many years ago I heard a phrase that did not sit well with me and that phrase was, “At the end of the day, it is what it is.” Those eleven words were stated during a press conference when an athletic director was releasing a coach from his coaching duties. When I heard the words pass through the lips of the athletic director, I could feel my ears getting hot as blood rushed to my head in a sudden and slightly unexpected wave of anger. In my view, not that anyone asked or cared, the coach deserved at least another year to build his team. What I didn’t understand until almost six months later is that there were other circumstances that led to the athletic director’s decision and in an act of prudence, he decided to keep that information out of the press in order to not tarnish the coach’s name. Basically, I was not privy to all of the information that was used to make a very difficult decision and furthermore, behind the scenes, there were other issues occurring of which the director could not speak.

I am not a historical expert on Pope Pius the Twelfth and his actions during World War 2; however, I understand there is some controversy with regard to his perceived inaction against Hitler. What I would say to the reader echoes my above paragraph in that there is so much more to the story and many things were taking place behind the scenes with great secrecy and extreme risk for loss of life. Of course, the seriousness of this account goes way beyond a succinct press conference regarding a coach losing his job as it delves into mind-boggling plots testing the virtue and resolve of men trying to stop the head of the Nazi war machine.

On the official Catholic Man Show Technical Read Scale**, I rate this book at a level 6 as it takes some extra time to read in order to follow the characters and their relationship to each other and the plot. At times I felt I needed to jot down character’s names and their positions to sort out all of the details, but I was able to keep going and mostly figure out what was taking place. What I can tell you is that many people from all walks of life and all positions of the profession, whether military, priest, religious, or layperson, put themselves in harm’s way and sacrificed everything in order to try and remove Hitler from the earth.

This literary work details the actions of many courageous people. One such person was a catholic man named Joseph Müller, who went by the nickname of Joey Ox. During the course of this story, Mr. Müller befriended Dietrich Bonhoeffer and toward the end of the book road closely to Pastor Bonhoeffer in a van as they had both been captured and were being transported to an SS controlled prison. One of Müller’s driving forces was thinking of his daughter preparing for her first holy communion as he was preparing for his death at the hands of his captors. Be certain there is much more to the story of Joey Ox and I believe it is best left for each person to experience it by reading this book.

I have often wondered if there is more than random coincidence as to the timing when we read books. I mean, is it possible that God is trying to reveal something to us when we read a book? I am not suggesting that God would want us to read a book that would lead us down a path to sin, but since our God is not constrained by time, date, location, and/or method He could nudge us or tap us on the shoulder by any avenue He deems appropriate and beneficial. For me, this book was a wake-up call to pay better attention to not only my spiritual life, but also the world in which I live, to stay alert, and to remain fervent in prayer remembering the battle between good and evil never stops.

Since finishing this book, I have had many thoughts bouncing around in my head, but one thought continues to manifest itself. Actually, it is more of a question than a thought. The question is are there people in the world today willing to risk everything for truth, justice, and preservation of life? As a Christian and an optimist, my answer is yes, because I realize God has a long history of providing for his people through the most unlikely candidates. He never fails to provide and He loves to shine His light into the darkest of circumstances. I will admit at times I feel hope slipping away, but then I think back on the sacrifices people made in this account and further, I remind myself that each of us are alive at this moment in time for a specific reason, Therefore, I have to trust, no I have to believe that God will once again bring forth brave people, people like Joey Ox.

← Book Review: Mary at the Crossroads of HistoryCatholic Wilderness Camp →