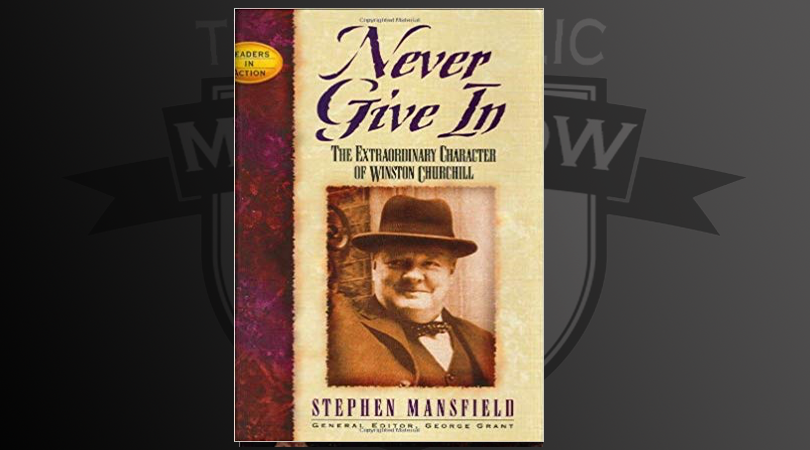 Never Give In: The Extraordinary Character of Winston Churchill by Stephen Mansfield

Have you ever been bullied? Do you feel alone in a room full of people? Were your parents distant? Do you battle depression? Is managing money a struggle for you? If you answered yes to any of these questions, then you have something in common with Winston Churchill.

This is the first book I have ever read about Winston Churchill, and I am hopeful that it won’t be my last. This story is divided into three main sections: 1. The Character of Leadership 2. The Pillars of Leadership, and 3. The Legacy of Leadership. Each section of the book is divided into short and informative “chapters” that delve into the life, lessons, successes, and failures of Winston Churchill. On a personal level, I truly enjoyed the relatively short “chapters” and found them to be both inspiring and refreshing in their honesty.

Are you seeking resolve? Do you want to know the truth behind being a leader? Do you need some inspiration to face problems head-on while developing strategies on how to bounce back from humiliation? Then read this book! This story is not only a solid lesson in history (did you know that Churchill was voted out of office shortly after the end of World War 2?), but further explores the wisdom of a determined and practical leader. As a fair warning, this book will challenge you to be a better man and to answer the call to duty. “Dread not when duty calls…stand erect and look the world in the face and do your duty without fear or favor.” Winston Churchill did not have a lack of knowledge of self as he states in his own words: “Being in many ways a coward-and particularly at school-there is no ambition I cherish so keenly as to gain a reputation of personal courage.” Rather, he was known for his brutal self-honesty and ability to face issues with truth and determination.

Before reading this book, I knew very little about the life of Winston Churchill. I made the assumption that this great leader, who led his country through the turbulent years of World War 2, had a blessed childhood with a strong and loving family life. However, like with most assumptions, I was wrong. In truth, his parents were distant from him, although he desperately wanted to please his father and gain his approval. Men, there is no escaping the fact that our children look up to us and further, they desperately want and need our love and attention. Churchill was a devoted father and knew the importance of having a home and family life, “There is no doubt that it is around the family and the home that all the greatest virtues, the most dominating virtues of human society, are created, strengthened and maintained.”

To say Churchill was a hard worker and busy man is quite an understatement. He published over 50 books, won the Nobel Prize for Literature in 1953, and of course, led his country, but he also had great knowledge on the importance of having hobbies in order to refresh the mind and body. As the author so easily puts it: “The legendary sharpness of his [Churchill’s] mind and endurance of his body were enhanced by his belief that a change is indeed as good as a rest, and that the best work is done by those who know when to stop working.” In other words, as Adam and David have put it many times on The Catholic Man Show, we are made for leisure. We need the balance of work and rest to fully live out the vocation that God has placed in our hearts. Sometimes the hardest thing to do as men is to admit when you need a break. However, that is when you need to step away and allow your mind and body to recharge.

There are many issues in our world today that seem to make less sense. In the past few weeks we have watched lawmakers in two states cheer the passage of legislation that makes it legal to kill a full term baby. I am certain that one does not have to be Christian or even religious to see that killing a baby is wrong. As I sit here typing, I look at the sacrifices that Winston Churchill made in his life and wonder perhaps if he is not imploring men to rise up and stand firm on issues that are wrong. What I am trying to convey is that Winston Churchill would not give in on issues that were incorrect, so much so that he was ostracized from social circles. The author puts is much more eloquently: “True, his lone voice from the wilderness was the subject of cruel jokes in fashionable parlors of England, but Churchill was right and he knew it. He knew it because he was not in those fashionable parlors, but standing in the harsh yet clarifying light of abandonment, ridicule, and seclusion.”

I would submit that Churchill himself could answer the above call for men to stand up for what is true and correct because that is the way he lived his life. I think he said it best when he said: “What is the use of living, if it be not to strive for noble causes and to make this muddled world a better place to live in after we are gone?” The author takes it another step further by stating it was if Churchill was saying the following: “Think what your actions now will mean, years hence when you remember them again. What kind of person will you wish you had been, what kind of sacrifices will you wish you had made, when you or those who survive you look back upon this from the future?” As men, whether single, married, or otherwise, we are called to a life of sacrifice and service. Fortunately, there are men that have laid the groundwork before us and left us examples of how to do right in the face of overwhelming odds, and I hold fast that one such example was Winston Churchill.

← Looking for a prayer to pray with your wife? Print this off and start praying.Book Review: “Bullies” by Ben Shapiro →