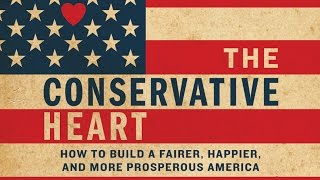 How to Build a Fairer, Happier, and More Prosperous America

What qualities come to your mind when you think of a political conservative? You might think of someone that is financially responsible, sensible, and you may even think of someone who is just like you: a member of the working class. But chances are, if you were to ask a friend of yours who does not share your beliefs to describe a political conservative, you would likely get answers such as “judgmental,” “cold-hearted,” and “self-righteous.” We know that these words couldn’t be further from the truth, but the bigger question is this: Why do people have this perception of conservatives? In Arthur Brooks’s The Conservative Heart, we find not only the answer to this question, but also how we can show compassion and goodwill at the heart of every conservative ideology.

My favorite point that Brooks makes throughout the book is that work gives you purpose. Often, when conservatives hear the words “social programs,” we turn our noses up. We say that people on social programs need to get up and get a job so that they don’t need to be on that program that is causing the taxpayers to lose so much money. Brooks points out that the better way to approach this issue is not by arguing the economics of it, but by showing how work gives people purpose and ultimately brings them happiness. Some compelling examples, which the reader will likely enjoy, are the stories about a slum in India starting to prosper and a ghost town in Austria.

While Brooks spends most of the time talking about work, he also highlights how important faith, family, and community are to finding happiness. Brooks points out that financial poverty is only partly why so many Americans feel unfulfilled. He says that poor Americans are deprived of faith, family, community, and meaningful work, and as a result, much less likely to describe themselves as “very happy.” While conservatives are more than willing to donate to charitable causes, he shows that the problem cannot be solved simply by money. He conveys his point by telling the compellingly sad story of Rosa Lee, while showing how we can find the solution through the auspicious story of the formerly homeless Dallas Davis.

The final point that I would like to make in this book review is that Brooks provides seven dynamic actions to help conservatives effectively communicate their standpoints and beliefs to Americans. Although I will not go into each point here, a few of my favorites were: be a moralist, get happy, and say it in 30 seconds. He advises on how conservatives can claim the moral high ground to best communicate beliefs, have conversations about conservatism with good humor, and how to be succinct when stating the conservative agenda.

Arthur Brooks’ book is an essential manual for any sincere conservative that wants to positively impact his or her community. If you want to read uplifting stories, learn how the United States entered into the current divided political climate (and see how this can be resolved), or if you are looking for the ideals that will radically improve United States citizens’ quality of life, read this book. After all, the future of the United States just might depend on it.

Alice Keithly is a recent graduate from Oklahoma State University and the daughter of Kent Keithly, a frequent book review writer for The Catholic Man Show. Cheers to Jesus!