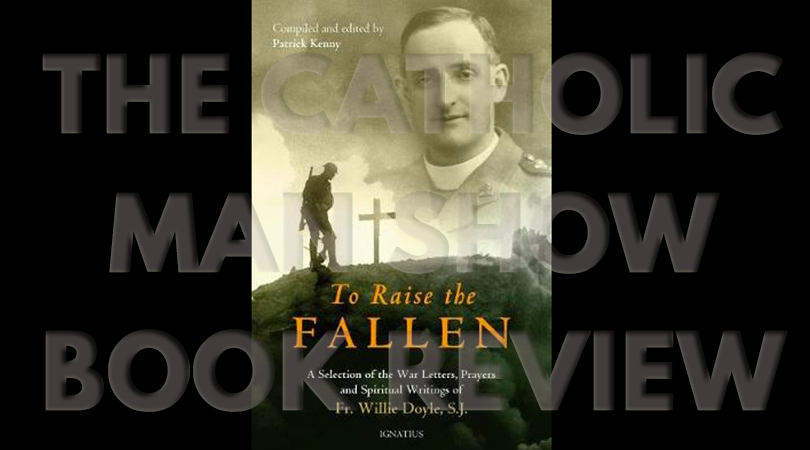 Compiled and Edited by Patrick Kenny

Are you looking for some motivation or inspiration? What words would you use to describe military life? Perhaps duty, honor, courage, and self-sacrifice come to mind or maybe early mornings, lack of sleep, and discipline enter your thoughts. A reader will find all of these qualities in this book, but more importantly, a reader will discover a man who lived a life of humble service and who never intended for any of these letters to be published. It was Father Willie Doyle’s S.J. desire to have his letters destroyed upon his death, but lucky for us they were preserved.

I read this before Covid-19 burst into our lives, but I have found myself reflecting more on this story over the past several weeks. I think I have mentioned before that I am drawn toward personal accounts, especially ones that encompass overcoming adversity and persevering through difficult circumstances. I know by looking at the calendar I would be classified as middle-aged, but truthfully, I still like tales about heroes who rush into battle and complete their mission despite their fear and anxiety. I guess books like this take me back to a younger time in my life where things weren’t so complicated or over thought. You know the times where your biggest worry was what flavor of pop you would have after your little league game.

What did I learn the most from this book? Honestly, it is hard to settle on just one thought because the text of these pages contains meaningful content, but I know I discovered a lot about faith. I read several passages, whereby all accounts Father Doyle should have died, but somehow, he survived and he was quick to credit our Lord. On one occasion, a shell barely missed him on the battlefield and he credits the consecrated host he was carrying with him for his miraculous preservation. In another account, on 08/15/1916 (Feast of Our Lady’s Assumption) he and the men around him were spared from any shrapnel when a shell exploded close by and he was quick to credit their protection to Mary’s mantle. Yes, Father Doyle was a man of great faith and I think he sums it up the best in his own words referring to why the soldiers seemed to fear nothing, “Why should they? They had made their peace with God. He had given them his own sacred body to eat that morning, and they were going out now to face death, as only Irish Catholic lads can do, confident of victory and cheered by the thought that the reward of heaven was theirs.”

On the official Catholic Man Show technical read scale*** I would give this book a score of 4 as it is easy to read, but will challenge the reader to pause for reflection and perhaps take notes from time to time. This story contains many powerful and succinct statements about life, the benefits of daily Mass, character, the power of absolution, and death that are not only thought-provoking but also inspiring. A prevalent underlying theme throughout this work is self-sacrifice and early in the introduction of the book, we find a diary entry from Father Doyle asking Mary to help him “die a Jesuit Martyr” and true to form his request was fulfilled.

As you may have guessed a fair amount of this book is focused on Fr. Doyle’s service in World War 1; however, the introduction of this book spans 23 pages which summarizes the key events in his life. One of my favorite stories is that early in his life Fr. Doyle persevered over temptation with regard to earning his first schilling. As the story was told in the book, he was on his way to a pastry shop when he passed by a beggar and was left with two choices: 1. Self-service or 2. Self-sacrifice. Any guesses to what he did with the schilling? Of course, he chose self-sacrifice, and as the book states “grace carried the day”.

After the introduction, the first chapter is titled Letters from the Front which delves into his letters during the first world war (I have eluded to that portion of the story earlier in this review). The second chapter, The War Within mostly spans Father Doyle’s time as a priest before going to the war and covers his diary entries dealing with mortification, self-denial, the importance of daily discipline, his fears of following God’s will, and his struggle to embrace suffering. Yes, as holy as Father Doyle was and as much as he gave up, he still felt he missed the mark at times with regard to relinquishing daily conveniences for the glory of God. He explained this thought process further in Chapter three titled, Spiritual Advice when reflecting on St. Joseph. He states, “I contrast the obedience of St. Joseph with my obedience. He’s so prompt, unquestioning, uncomplaining, perfect; mine given so grudgingly.” Ouch, that one hits close to home for me!

The final two chapters are somewhat self-explanatory in the title, Meditations on the Stations of the Cross, and Personal Prayers, but they should not be overlooked. In reading these passages, one can easily understand how Father Doyle was a retreat leader and spiritual advisor as even after his death over 100 years ago his words remain behind and draw us closer to Christ. I know that he did not want any of his letters to remain, but I hope he would be glad to know they are still pointing people toward Christ in the 21st century.

The conclusion of the book contains the appendix which is filled with testimonies from people that knew Father Doyle. It was difficult to read this portion of the work without paralleling Father Doyle’s battlefield stories with those of Father Emil Kapaun, a priest from Kansas, who was a Chaplain in the Korean war (see TCMS book review titled A Shepherd in Combat Boots for more details). Both men demonstrated fearlessness and bravery in their service to the fallen and wounded soldiers around them. Almost every testimony speaks of Father Doyle’s lack of self-concern for his own safety and points again to his internal fortitude to serve without yielding to fear. Here is a small sample of the words used to describe Father Doyle among the selection of testimonies: “Utterly fearless, walking with death with a smile on his face, a real saint, and no braver or holier man ever fell in battle than he.”

Maybe right now you are feeling unsettled or things seem out of focus in your life. Well here’s a secret, I think we all experience those emotions at some point or points in our life. At times life can be difficult, but then perhaps you stumble upon a book like this one. You see how Christ uses one person to help people through their darkest hour of fear, pain, and suffering. How He never truly leaves you and then you feel hope creep back into your life. Maybe hope is just one legacy Father Doyle left behind for us, but I think it is only correct to finish with his own words about divine providence: “Abandon yourself completely into the hands of God, and take directly from him every event of life, agreeable, or disagreeable. Only then can God make you holy.”

← Fish for Friday: How to Cook Salmon on the GrillBook Review: Autopsy of the Deceased Church by Thom Rainer →