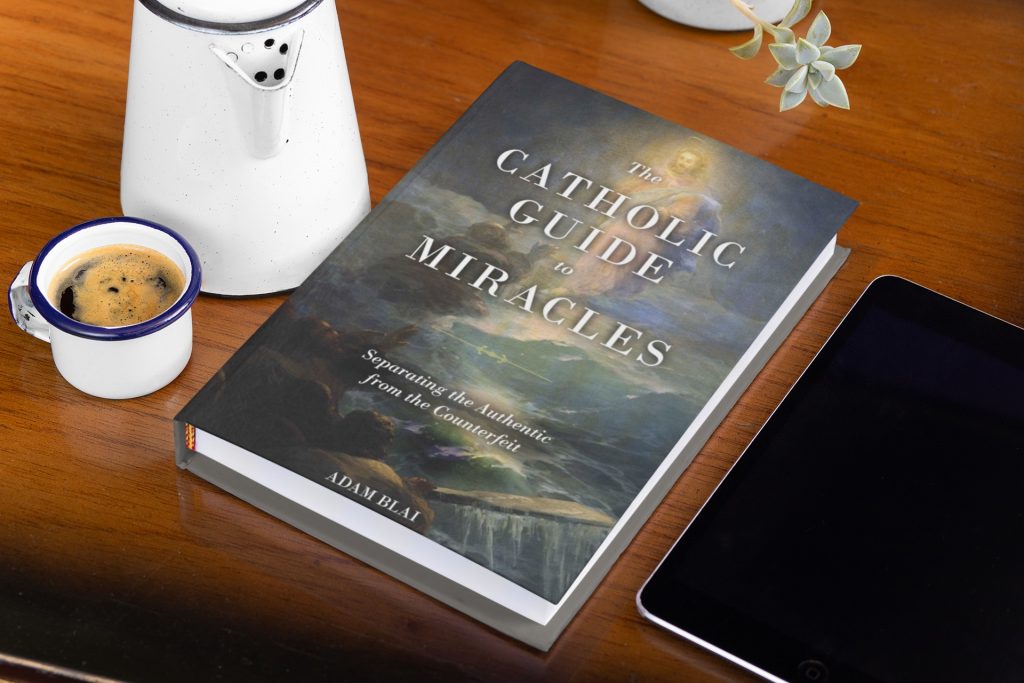 Book Review: The Catholic Guide to Miracles: Separating the Authentic from the Counterfeit

We call it a wash board where I live, and it is not something you use to wash clothes. No, we use wash board to describe the wear pattern in the gravel and dirt roads surrounding our home. Perhaps you are familiar with those types of roads, and maybe you have a different name you use to describe them. If you have never experienced them, then consider yourself lucky as the repetitive nature of wash board roads (narrow peaks and valleys that repeat for several hundred feet) not only compromises the traction of your car but also does a number on your suspension system. Every year after harvest, there is a large collection of nuts, bolts, and tools which have all shaken away from their respective vehicles, lining the middle of the road, and have kept my visits to the local tire store frequent.

What do wash board roads in rural Oklahoma have to do with miracles? Well, I will try to explain. Last September, I had just passed over the crest of the hill near my home when I saw a pick-up lying on its side in the ditch. As I came closer, it took my brain a minute to comprehend what I saw. The truck was lying on the driver’s side, and inside the cab, a man was standing up with his feet on the ground where the driver’s window was before it broke. The man was mostly calm but a little shaken up. Thankfully he was not hurt and could clearly tell me his name and where he was from. He did keep saying, “I don’t know how, I don’t know how?” and I kept saying, “It was the wash board roads, it was the wash board roads,” but later that night, I realized that I thought what he was trying to say was, “I don’t know how I wasn’t hurt?” Perhaps it was a miracle?

Not too long before reading this book, we had a discussion at our monthly men’s Bible study about why we don’t see miracles today. I think we were mulling over the recorded miracles found in the Gospels and wondering, do those happen today? This work by Adam Blai definitely provides evidence that miracles are still occurring today, and for me, I found this book to be a source of not only contemplation but also inspiration. On the official Catholic Man Show technical read scale,***  I rate this book at a 5 as it is an enjoyable read that is hard to put down but also steers the reader to pause, think, and at times pray.

This literary work is 11 chapters long, spanning 165 pages, including the introduction and conclusion. Logically the book starts with the history of miracles and their definitions. It covers a wide array of topics including, but not limited to: Marian apparitions, miraculous healings, stigmata, incorruptibles, levitation, and even demonic counterfeits. Not to fear there are many other topics as well and in the remainder of this review I would like to present some of my favorites.

In the miraculous healings section, a couple of stories stood out. One account involves a first-class relic of St. Mary of Jesus Crucified.  The author explains how he has used it with people to provide physical or spiritual healing, and those stories are powerful. However, he closes this paragraph by explaining what happened when the relic was used during a solemn exorcism. The writer explains that when the relic was touched to the person’s head (without any explanation to the possessed person what the object was) that the demon cried out, “That Nun! That Nun! She is helping the Christians in the Middle East die well! She is making them saints! That nun is stealing so many souls from us!” Shortly before the end of the chapter on miraculous healings, the writer shares a powerful and mystical account of what happened to him when he kissed the reliquary of St. Thérèse of Lisieux. Not only did he feel a “strong electrical shock,” he also experienced “brief unconsciousness” and “several religious visions of himself in ministry.”

The chapter on Eucharistic Miracles dives into a little philosophy by devoting some explanation of the substance and accidents of the Eucharist. I recall during one TCMS episode Adam and David discussing this as well (I wish I could remember which episode!). As one can imagine this chapter is filled with some very interesting details and a couple that grabbed my attention where the story of Rhoda Wise, who lived in Canton, OH and was both a mystic and stigmatic and her interaction in helping one Rita Rizzo (aka Mother Angelica) with a significant stomach issue. Going a little further the author describes what he witnessed when visiting Rhoda’s home with regard to a host resting in the bottom of a bottle of holy water and how the host appeared there decades prior after a “flash of light” and has not since dissolved. In the final portion of this chapter, the author shares his personal story of what occurred when he received Holy Communion while attending mass at the Moses Chapel on the Mount of Transfiguration. A reader definitely does not want to miss that account.

Many parts of this book spoke to me in different ways, but one very powerful part of this book involved the details surrounding a potential contemporary stigmatic that the author spent some time investigating. In a mere 14 pages, the author walks you through what a current person has experienced the past 15 years with regard to stigmata, but more specifically the suffering, sensations, and thoughts of Christ during his passion. One might think this has been a one-time event for this person, but no, this has occurred in some form on every Thursday and Friday since it began. If you have ever watched Mel Gibson’s The Passion of the Christ then you know the details; however, the story in the book offers so much more and provides some specific insights into Christ’s passion. I know a paragraph in a book review does not give the proper justice to this section of the book, but it seems prudent to relate two important details that the stigmatic experienced that Jesus wants to relate and those are: “1. The sacrifice for our souls was far deeper than most of use appreciate and 2. We need to appreciate the depth and power of the Lord’s prayer.”

In summary, I am thankful for this book by Adam Blai as it does provide specific examples of miracles that are still happening today, but also provides the reader with an excellent source for holy contemplation. Coincidentally, during our priest’s homily this week end he posed the question many of us still have regarding where are all the miracles today. He speculated that if we fully opened ourselves to the Holy Spirit and surrendered everything to God then we would likely see more miracles like we read about in The Acts of the Apostles 5:12-16 and dare I say the ones I just read about in this book. He was not suggesting that we put God to the test, but rather abandon ourselves to the will of God, of course easier said than done, but then again, what does the Our Father say? “Thy will be done on earth as it is in heaven.”