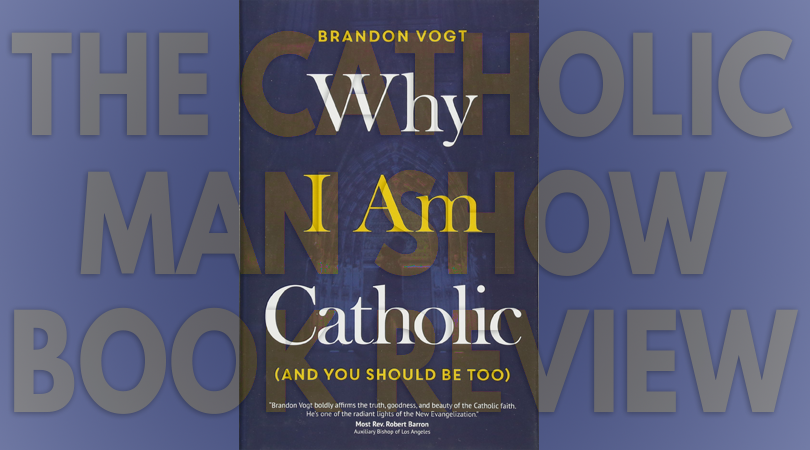 Book Review: Why I Am Catholic (And You Should Be Too) by Brandon Vogt

Conversion stories always seem interesting to me. A common thread I have noticed in most of the stories is people are searching for the truth. I wish I could say that my conversion and journey to the Catholic church was spurred by a deep quest for truth with hours of painstaking thought, debate, and self-doubt; however, that would not be honest. My conversion started as a promise I made to a family member and either to a fault or to a credit I strive to keep my promises. I had no idea in 1997 when I joined the Catholic Church where the road would lead me, but through these past 22 years I have come to love the truth and beauty of the Catholic faith. If you are seeking a true, concise, logical, and well thought out case for being Catholic then I would suggest you read this book by Brandon Vogt.

Brandon Vogt does a commendable job of combining details, facts, and statistics into a book that is easy to understand and follow. Some alarming figures are present in this story like the Catholic church has a 6.45 loss/gain ratio, meaning for every one person entering the church, another 6 people are leaving the church. So, with statistics like that, the author poses the question, “Why be Catholic?”. Surely, a person could find anything else to be but Catholic; however, Vogt quotes Chesterton to answer the question and Chesterton’s answer is “The difficulty of explaining why I am a Catholic is that there are ten thousand reasons all amounting to one reason: that Catholicism is true.”

The author has arranged this book in three different parts all of which work together to make a strong case for Catholicism. The three parts are 1. Catholicism Is True, 2. Catholicism Is Good, and 3. Catholicism Is Beautiful. Each section is divided up into subsections that delve into the author’s supportive details for his choice of becoming Catholic. He concludes the book with a chapter titled “Join the Rebellion” where he offers readers advice on how to become Catholic, as well as, recommended reading for those on a voyage toward Catholicism.

So, what is it about Catholicism that makes it true? That question cannot be easily answered in a paragraph or two, but the author presents some strong evidence. For one, Jesus founded a church through Peter and that church was around for roughly 400 years before the bible was written, and Sola Scriptura did not come into play until “nearly 15 centuries after Jesus’ Resurrection.” In addition, the church Jesus founded was relatively unified for its first 1,000 years (Great Schism around 1054), and further the real presence of Christ in the Eucharist was the “near-consensus view of Christians for 1,500 years.”

A final strong defense of the Catholic church’s truth is presented by the church herself. Mr. Vogt references a teaching from Pope Paul VI from the Declaration on the Relation of the Church to Non-Christian Religions. The teaching states, “Other religions found everywhere try to counter the restlessness of the human heart, each in its own manner, by proposing ways, comprising teachings, rules of life, and sacred rites. The Catholic Church rejects nothing that is true and holy in these religions. She regards with sincere reverence those ways of conduct and of life, those precepts and teachings which, though differing in many aspects from the ones she holds and sets forth, nonetheless often reflect a ray of that Truth which enlightens all men.” In other words, as the author points out, “the Catholic Church indeed believes Catholicism is the fullest expression of truth on earth, but it doesn’t assume other religions are thus completely wrong.”

What does it mean to say Catholicism is good? In reading the first part of this section I was reminded of something my wife always tells my children and that is when Christians came to new lands, they always seemed to build churches, schools, and hospitals. The author takes it further stating that Catholicism has made “contributions from science to law, economics, and morality,” such that, “much of the cultural foundations we take for granted today are grounded in Catholicism”. Speaking of science, this chapter of the book is full of priests who made significant contributions to science over the course of history, including Father Georges Lemaître who developed a theory called “the hypothesis of the primeval atom,” of which in 1933 Einstein stated, “This is the most beautiful and satisfactory explanation of creation to which I have ever listened.” To be fair Einstein originally thought Lemaître’s understanding of physics was poor, but later his opinion changed as previously noted. Mr. Vogt does point out that Lemître’s theory was “later known, derogatorily, as the big bang theory.”

The author further explores the goodness of the Catholic church by focusing on its charity through the centuries and highlights St. Lawrence, St. Damien of Molokai, and St. Teresa of Calcutta as just a few examples. Some other arguments Mr. Vogt makes for the goodness of the church is that she “does not go with the times” and in this section, he focuses on some of the more controversial teachings of the church including “sexual morality and the issues of homosexuality, abortion, contraception, divorce and cohabitation.” The author closes the section on the goodness of the church by acknowledging that the Catholic Church offers “true forgiveness” and that through the sacrament of reconciliation we are able to hear that our sins are forgiven. In other words, the Catholic Church allows us to be “certain of forgiveness.”

How is Catholicism beautiful? The author presents many examples for the beauty of the church. He starts with art and he states, “the beauty of art points to the beauty of God, and creating art is a participation in God’s very creative power.” He wraps beauty up further by stating, “Catholicism cherishes beauty and champions the arts because both lift up the soul of humanity.” I think it is safe to say that God does not confine himself to the boxes we put him in, rather he will use any pure means to reach people and one of those means is the arts.

Some other offerings from the author regarding the beauty of the church are stated as follows: “We cooperate with God to bring about His purposes, and in so doing we participate in his life-we taste divinity” and that “the church exists for sinners.” I was at mass this past year on Christmas Eve when I distinctly remember our priest saying, “God became man so man could share in God’s divinity.” To be honest, that revelation shocked me at first, but through much thought it has to be true and Mr. Vogt further cements the point by stating, “Catholicism teaches that God delights in working through secondary causes, including and especially humans.” God shares His life with us to bring about His purposes and to give us a glimpse of heaven.

I am confident I could go on for pages and pages about the truth, goodness, and beauty of the Catholic Church, but now is the time to recommend readers grab a copy of this book and start a journey of their own. I would be remiss if I did not close with a couple of other reasons for being Catholic. The first reason comes from the author himself, “the Church is the bearer of God’s message, and that comes with a huge responsibility. This is why the Church stoutly refuses to change its teachings on morality or faith. It’s not because it won’t-it’s because it can’t.” One final reason comes from a story of G.K. Chesterton and his umbrella. The story goes that when Chesterton would visit churches, he would leave his umbrella by the back door during the services and when the service concluded he would always find his umbrella where he left it, except when he went to a Catholic mass. Yes, that is right, his umbrella was gone after mass to which he decided, “If the Catholic Church offered such a generous and open doorway to the rabble and the shufflers, both sinners and saints, then he had indeed found a home where he could also fumble his way into heaven.”

Get the book here

About the author Brandon Vogt:

WANT TO BE A GUEST BLOGGER FOR THE CATHOLIC MAN SHOW? SEND US AN EMAIL AT TCMSJOBS@GMAIL.COM

← Audiobooks: What We Have Listened to in 2019Interview: Aquinas 101 – The Thomistic Institute →