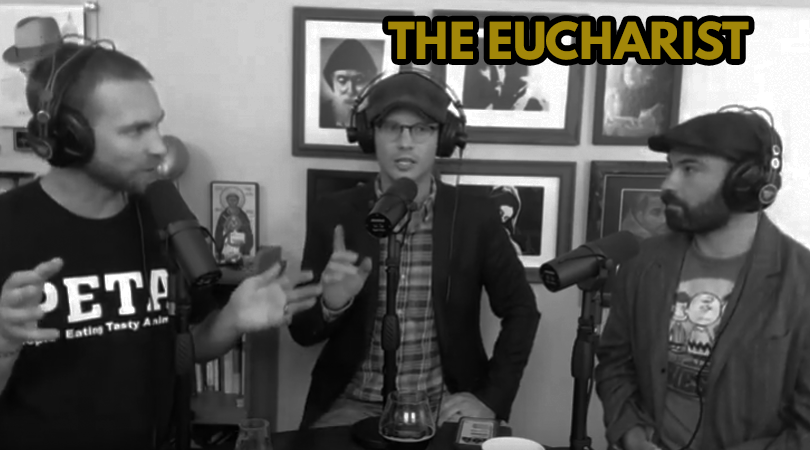 The Eucharist – the source and summit of the Christian Life.

Special Guest: Thomas Lackey – a parishioner at Most Precious Blood in Tulsa, Ok.

We threw out the format in this episode! No drink. No gear. Just sitting around the table with friends and talking about the most important topics in our faith. We want to thank Thomas and his family for being our guest on not only this episode but next week’s episode as well! Spoiler Alert: We talk about 5 philosophers men need to know and read

If you want to watch what happens in between segments – make sure to watch out the episode below.

Here are some of the notes Thomas Lackey provided:

○ The effect of this sacrament ought to be considered, first of all and principally, from what is contained in this sacrament, which is Christ; Who, just as by coming into the world, He visibly bestowed the life of grace upon the world, according to Jn. [1:17]: “Grace and truth came by Jesus Christ,” so also, by coming sacramentally into man causes the life of grace, according to Jn. [6:58]: “He that eateth Me, the same also shall live by Me.” Hence Cyril says on Lk. [22:19]: “God’s life-giving Word by uniting Himself with His own flesh, made it to be productive of life. For it was becoming that He should be united somehow with bodies through His sacred flesh and precious blood, which we receive in a life-giving blessing in the bread and wine.”

Secondly, it is considered on the part of what is represented by this sacrament, which is Christ’s Passion, as stated above (Question [74], Article [1]; Question [76], Article [2], ad 1). And therefore this sacrament works in man the effect which Christ’s Passion wrought in the world. Hence, Chrysostom says on the words, “Immediately there came out blood and water” (Jn. [19:34]): “Since the sacred mysteries derive their origin from thence, when you draw nigh to the awe-inspiring chalice, so approach as if you were going to drink from Christ’s own side.” Hence our Lord Himself says (Mt. [26:28]): “This is My blood . . . which shall be shed for many unto the remission of sins.”

Thirdly, the effect of this sacrament is considered from the way in which this sacrament is given; for it is given by way of food and drink. And therefore this sacrament does for the spiritual life all that material food does for the bodily life, namely, by sustaining, giving increase, restoring, and giving delight. Accordingly, Ambrose says (De Sacram. v): “This is the bread of everlasting life, which supports the substance of our soul.” And Chrysostom says (Hom. xlvi in Joan.): “When we desire it, He lets us feel Him, and eat Him, and embrace Him.” And hence our Lord says (Jn. [6:56]): “My flesh is meat indeed, and My blood is drink indeed.”

Fourthly, the effect of this sacrament is considered from the species under which it is given. Hence Augustine says (Tract. xxvi in Joan.): “Our Lord betokened His body and blood in things which out of many units are made into some one whole: for out of many grains is one thing made,” viz. bread; “and many grapes flow into one thing,” viz. wine. And therefore he observes elsewhere (Tract. xxvi in Joan.): “O sacrament of piety, O sign of unity, O bond of charity!”

○ The celebration of this sacrament is called a sacrifice for two reasons. First, because, as Augustine says (Ad Simplician. ii), “the images of things are called by the names of the things whereof they are the images; as when we look upon a picture or a fresco, we say, ‘This is Cicero and that is Sallust.’” But, as was said above (Question [79], Article [1]), the celebration of this sacrament is an image representing Christ’s Passion, which is His true sacrifice. Accordingly the celebration of this sacrament is called Christ’s sacrifice. Hence it is that Ambrose, in commenting on Heb. 10:1, says: “In Christ was offered up a sacrifice capable of giving eternal salvation; what then do we do? Do we not offer it up every day in memory of His death?” Secondly it is called a sacrifice, in respect of the effect of His Passion: because, to wit, by this sacrament, we are made partakers of the fruit of our Lord’s Passion. Hence in one of the Sunday Secrets (Ninth Sunday after Pentecost) we say: “Whenever the commemoration of this sacrifice is celebrated, the work of our redemption is enacted.” Consequently, according to the first reason, it is true to say that Christ was sacrificed, even in the figures of the Old Testament: hence it is stated in the Apocalypse (13:8): “Whose names are not written in the Book of Life of the Lamb, which was slain from the beginning of the world.” But according to the second reason, it is proper to this sacrament for Christ to be sacrificed in its celebration. 3.Q83.A1