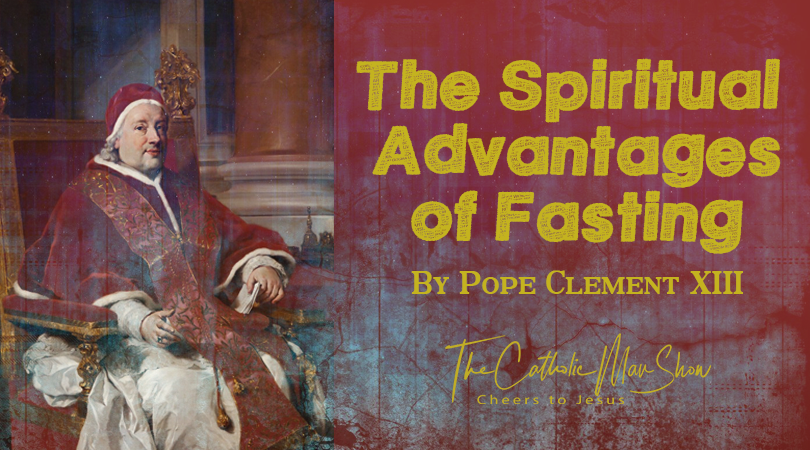 BONUS CONTENT: A PAPAL ENCYCLICAL ON THE SPIRITUAL ADVANTAGES OF FASTING.

Lent is just around the corner so we thought we would share with you a short audiobook of the papal encyclical from Pope Clement XIII on the spiritual advantages of fasting.

If you prefer to read along, the script is below.

If you like this, consider supporting us on patreon! On top of receiving cool thank you gifts like a glencairn glass and/or a beer glass, you will have instant access to the following:
Become a Patron!https://c6.patreon.com/becomePatronButton.bundle.js

How to: Praying the Liturgy of the Hours from the late Deacon John Donnelly: https://www.patreon.com/posts/32679064

Steve Pokorny on Beauty in a Pornified Culture: https://www.patreon.com/posts/25300345

Social Media and the Church with Fr. John Hollowell: https://www.patreon.com/posts/34551676

Fr. Cosgrove’s Advice to Adam and David on what to do for your kid’s first communion: https://www.patreon.com/posts/37631888

Adam and David’s talks at conferences:

Adam and David talk on “How to be a Catholic man in today’s culture: https://www.patreon.com/posts/26134379

Adam and David’s Authentic Friendship talk given at the Courage Conference in 2019: https://www.patreon.com/posts/29345385

Profession Recording of Uniformity of God’s Will by St. Alphonsus Liguori: https://www.patreon.com/posts/35324681

Professional Recording of a Poem on the Passion of the Lord: https://www.patreon.com/posts/34864248

Professional Recording of Pope Leo XIII on the Devotion of the Rosary: https://www.patreon.com/posts/37557226

Professional Recording on Promoting the Devotion of the Most Precious Blood: https://www.patreon.com/posts/38885894

Professional Recording on the Bull of Canonization of St. Francis: https://www.patreon.com/posts/42211330

On the Spiritual Advantages of Fasting

APPETENTE SACRO (On the Spiritual Advantages of Fasting)

The holy season of Lent approaches, which is full of mysteries but not without mystery. It precedes that great celebration of Easter, by which alone the dignity of all other religious occasions is consecrated. Venerable Brothers, you should see that the faithful religiously observe this holy fast, which was recommended by the testimony of the laws and the prophets, consecrated by the Lord Jesus Christ, and handed on by the apostles. The Catholic Church has always preserved it so that by the mortification of the flesh and the humiliation of the spirit, we might be better prepared to approach the mysteries of the Lord’s passion and the paschal sacraments. Likewise through fasting we might rise again in the resurrection of Him whose passion and death we joined after we put off the old man. Our predecessor Benedict XIV aroused you with two earlier briefs, that you might zealously preserve such a holy and salutary institution. Your work and zeal should recall the discipline of the Lenten fast, now weakened by many corruptions, to its original observance. For this reason, Pope Benedict XIV removed from your midst many quibblings which impaired fasting. However, as there are many persistent threats to the Lord’s flock from the foul and dangerous enemy of the human race, we should be wary lest the sly old fox add new calculations and perverse customs to the minds of the weaker faithful. These things will weaken the strength of the fast and make it sink back to that point from which it was recently recalled. We think it is necessary to send you this letter to show your brotherhood how fearful We are that the old corruption might remain, or that a new stain might come upon ecclesiastic discipline in this matter, with the resulting destruction of the souls of the faithful.

2. We understand that it is just as necessary to lessen this fear of Ours as it is to increase your pastoral vigilance by it. After Our predecessor’s letters, it perhaps remains for you to eradicate with God’s help anything pertaining to the old or new corruption for breaking the laws of the fast, or the fabrications of opinions, or the customs which shy away from the true power and nature of the fast. Among these We number that abuse which rumor has brought to Us: while many people were permitted by dispensation to eat meat for just and legitimate reasons, they thought it was also permitted to consume drinks mixed with milk, contrary to what Our predecessor thought was right. He was of the opinion that those who were permitted by dispensation to have meat, as well as those who were fasting in any way, with one mixture excepted, were comparable to those who had no dispensation. Accordingly they can have meat, or whatever originates from meat, in only one mixture.

3. You will begin most appropriately, and with hope of the greatest profit, to recall men to the observance of the holy law of fasting, if you teach the people this: penance for the Christian man is not satisfied by withdrawing from sin, by detesting a past life badly lived, or by the sacramental confession of these same sins. Rather, penance also demands that we satisfy divine justice with fasting, almsgiving, prayer, and other works of the spiritual life. Every wrongdoing–be it large or small–is fittingly punished, either by the penitent or by a vengeful God. Therefore we cannot avoid God’s punishment in any other way than by punishing ourselves. If this teaching is constantly implanted in the minds of the faithful, and if they drink deeply of it, there will be very little cause to fear that those who have discarded their degraded habits and washed their sins clean through sacramental confession would not want to expiate the same sins through fasting, to eliminate the concupiscence of the flesh. Besides, consider the man who is convinced that he repents of his sins more firmly when he toes not allow himself to go unpunished. That man, already consumed with the love of penance, will rejoice during the season of Lent and on certain other days, when the Church declares that the faithful should fast and gives them the opportunity to bring forth worthy fruits of penance. After all, it is always necessary to subdue concupiscence, for it is written, “Do not follow behind your desires, and do not turn away from your will.” Let the faithful easily turn their attention during this most holy time of year to lessening the intemperance of the body by fasting. In this way the soul might understand how it should prepare itself to recall the holy mysteries of the passion, death, and resurrection of Jesus Christ. Therefore, those who are spurred on by penance do not seek the delicacies of the table, which seem indistinguishable from forbidden foods, even with abstinence. However, one can rightfully say that whoever sets them on his table does not so much put aside his customary delicacies as give his appetites over to unusual enticements. Finally, those spurred on by penance do not seek escapes by which they might withdraw from fasting, nor do they seek various subtleties to break ecclesiastical law.

4. It is your duty, Venerable Brothers, to in spire enthusiasm and love of penance in the faithful by word and example. Thus, they will approach the fast more quickly, observe it according to the laws prescribed by the Catholic Church, and sanctify it through almsgiving and prayer. Finally–and this matter greatly concerns the Church–they should understand that they have died and been buried with Christ. They have been called to the new life of the new man in the paschal feast so that they can come to the risen Lord Jesus Christ in full confidence. The grace of our Lord Jesus Christ be with all of you, to whom We most lovingly impart the apostolic blessing as a pledge of Our love and good will toward you.

Given in Rome, at St. Mary Major, on the 20th day of December in the year 1759, in the second year of Our pontificate.