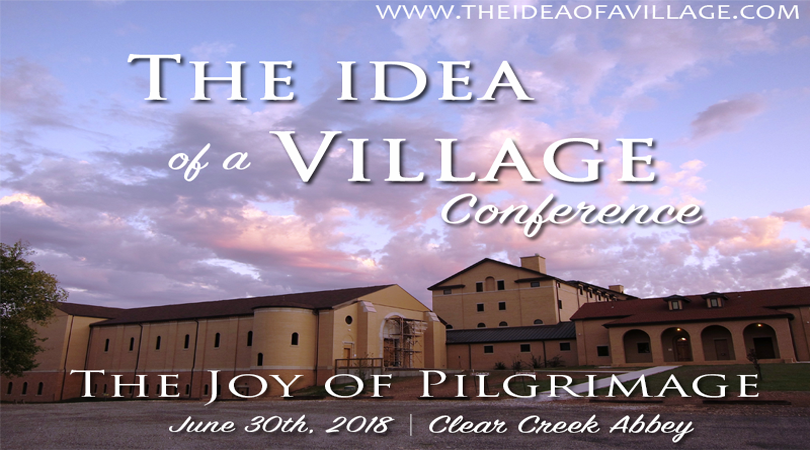 The Idea of a Village Conference

Recently we had the opportunity to speak with Sam Guzman from, The Catholic Gentlemen, about this weekend’s conference held at Clear Creek Abbey called, “The Idea of a Village Conference”

Sam Guzman: Many families have moved to live near Clear Creek Abbey and find a simpler way of life, and so a village is forming organically. But while these moves are intentional, no one is “planning” the community or regulating it. We have shared goals and values, but also differences of belief. So three years ago, some villagers began to wonder, what does it mean to live in community in the 21st century? Is it just living close to one another? Is it worshipping together? Or is there something more? The conference was started to further the discussion around Catholic community and how it relates to the formation of Christian culture.

TCMS: Talk a little about the advantage of it being hosted at Clear Creek Abbey.

Sam Guzman: The monks are the center of gravity for whatever happens at Clear Creek. Everyone moved here to be near the monks and to benefit from the prayers, worship, and example. It’s comforting in a way to know that whatever happens, the monks will still be there, praying and working. It’s a stability that’s rare in our fast-paced world. Hosting it near the Abbey acknowledges the importance of the monks in the formation of the Clear Creek community. It just makes sense.

TCMS: What can we learn from the Benedictine Monks at Clear Creek and why is it important to implement “Ora et Labora” in the domestic church?

Sam Guzman: I already mentioned stability, and I think that is a virtue we all need to learn, whether in our jobs, our marriages, or other areas of life. Virtue takes time to grow, and we can never experience this unless we sit still and stop rushing from one thing to the next in search of the perfect situation, which doesn’t ultimately exist.

Regarding prayer and work, prayer sanctifies everything we do. It helps us grow in communion with God, which really is the whole point of salvation and the Christian life. Without prayer, everything is sterile and fruitless, but with prayer, everything is full of life and fruitful. Work keeps us humble. It reminds us that, no matter how spiritually minded we may be, we must always be rooted in the earth. We are called to work by God, and Jesus himself spent the majority of his life laboring as a humble carpenter. Work teaches us that we don’t control nearly as much as we like to think, and it teaches us to depend on God for everything.

TCMS: This year’s theme is, The Joy of Pilgrimage. What does that mean?

Sam Guzman: Pilgrimage is a common metaphor for the Christian life. Pilgrimages are a struggle. There are many times when you’re feet hurt, you’re tired and thirsty, and you just want to quit and turn back. There may even be dangers and obstacles along the way. But there is also a beautiful goal you are progressing toward, the company of holy friends, worship, and new experiences that make it all worth it. When you arrive, you not only experience the joy and relief of meeting your goal, but you find that you have changed and grown from when you began. No one undertakes a pilgrimage and remains the same. So it is with the Christian life in almost every respect. The joy is found in the struggle. The goal keeps us moving forward in the company of others who are striving for the same thing. There will be times when we question whether it is worth it and want to quit, but in such moments the graces we will receive will transform our hearts and keep us moving forward.

TCMS: In the past, you’ve had speakers like Rod Dreher, Bishop Conley, and Dr. Cuddeback. Who are the featured speakers this year?

Sam Guzman: We have Fr. Dwight Longenecker, a priest and well-known author who is a convert from Anglicanism. He will share how his parish has turned into a thriving center of faith, as well as share stories of his own pilgrimages. We also have Sean Fitzpatrick, the headmaster of Gregory the Great Academy in Scranton, PA, an extraordinary boarding school for boys unlike anything else in the world. Then we have Dr. Mitch Kalpakgian, a professor and author of many books about education, literature, manners, Catholic culture, and much more. Finally, we have myself, a “villager” of Clear Creek, a writer and founder of The Catholic Gentleman, a ministry for men.

TCMS: Outside of the speakers, what other activities will be available?

Sam Guzman: We will have a tour of Clear Creek Abbey in the afternoon, led by Abbot Anderson. There will also be craft making demonstrations, workshops on food, a tour of the blacksmith shop where much of the metalwork for the Abbey is being created, and more.

TCMS: Is it too late to sign up? Where do we go to learn more?

Sam Guzman: Absolutely not! Tickets will be available at the door, but will be more expensive, so it is best to get them before the conference begins. You can buy them online at https://www.theideaofavillage.com. We hope to see you there!

TCMS: Thanks so much for the opportunity to learn more about the conference. Looking forward to being there!

← {Post Category:833}: Matt SiryBook Review: Reform Yourself! How to Pray, Find Peace, and Grow in Faith with the Saints of the Counter-Reformation →