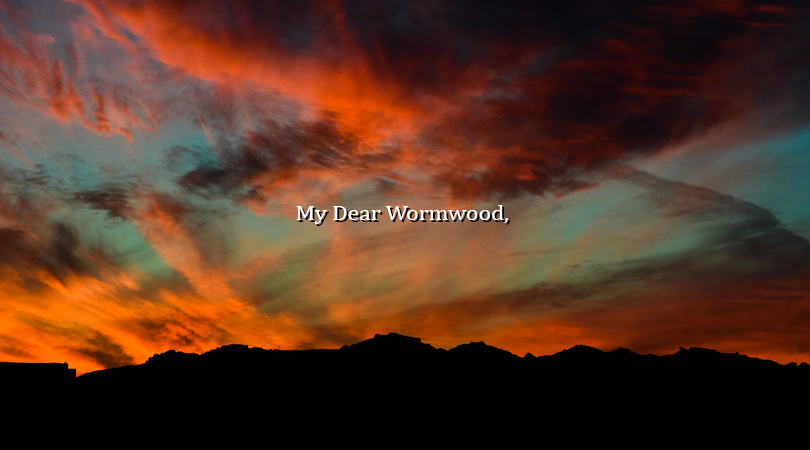 The Screwtape Letters by C.S. Lewis is a spiritual classic in its own right, though it has only been in publication since 1942. The book is written from the point of view of Screwtape, a demon who is giving advice to Wormwood, a “junior tempter” who is learning how to affect a human soul. Essentially, we read how the Devil attempts to sway our thoughts, actions, and intentions away from God so that we will enter Hell instead of Heaven when we die. The body of the text is made up of 31 chapters, or “letters” covering topics like cliques, false faith, sex, and a distortion of time, just to name a few.

The last letter, however, is especially interesting. Spoiler alert: the book ends with the human being in question dying, and ultimately entering into Heaven.

When we hear Screwtape explaining the process, there are certain steps in the experience of seeing Heaven for the first time. First, the human sees the Devil that had tempted him his entire life and then realizes he no longer has an influence over him. Next, the human sees “Them” – those beings who intervened in his life whenever he was tempted to sin. They’re the ones who helped direct him whenever he chose God over evil. Lastly, he meets “Him.” He meets Christ Himself, the God who knows his sin and his struggles even greater than the Devil who tempted him his entire life and has only Mercy to offer to His beloved brother.

Yes, we look forward to meeting Christ after death. But it’s that second stage that I want to focus on here: “Them.” Readers might interpret them as Angels, even our respective Guardian Angels. That’s certainly what I thought of on my first read. But there’s a deeper level that I think we, as Catholics, have to understand when it comes to the holy “Them.” In Heaven, we know that there are Angels, but we also know there are Saints.

The saints are those holy men and women who have gone before us, entered Heaven, and now spend an eternity in the awesome worship of God. But that’s not all they’re doing; now that they’re in Heaven, they recognize it’s truly what each of our souls is made for, and they want as many other souls there as possible. So, they’re also spending all of their time (really, all of time) praying for us who are still on earth. We might not know quite how good Heaven is yet, but they do, and it’s so good that they want every single individual person to understand God’s glory in its fullness.

Lewis writes of recognizing the angels and saints as friends in times of need; the human realizes that “he had always known them and realizes what part each one of them had played at many an hour in his life when he had supposed himself alone, so that now he could say to them, one by one, not ‘Who are you?’ but ‘So it was you all the time.’”

Think of those moments when you were on the brink of sin and resisted the temptation. Those times that you felt like you were about to break, and yet stood solid. The times that nothing seemed like it was going to work out, and yet everything did. What is it that sustained you? What is it that caused you not to give up in the struggle? What drove you beyond the threshold of “I can’t do it” into the realm of “I did it” – into success?

As much as we are tempted to say it was our own strength or grit, we have to realize that we are sustained by grace, and the saints are constantly praying for grace to intercede for us. It is that grace that leads us to make morally good choices when we’re tempted to do otherwise, to serve others as Christ served the poorest of the poor, and to ultimately reach Heaven. So, take time to thank the saints, whether it be the well-known ones we often pray with or even your own loved ones that have passed away who are looking forward to seeing you again in Paradise.

And then dare to even go one step further than that. The saints are in Heaven praying for us, so clearly, praying for others is saintly behavior. Therefore, shouldn’t we be building each other up in faith, hope, and love in our thoughts, actions, and prayers? If we truly believe that our mission in life is to become saints, then we ought to act like saints. And to act like a saint is to love sacrificially – to put another before oneself.

We all have our lives to live here on earth before we can hope for Heaven, and living our lives here properly is what will actually get us there. As you move forward into the next week, your next year, and beyond, strive to be a saint on earth. Pray unceasingly for others; speak to Truth, Beauty, and Goodness in all situations; love God with all your heart, all your mind, and all your soul. Be the person that another tempted soul might recognize, as Lewis put it, as having been there all the time in prayerful communion with him.