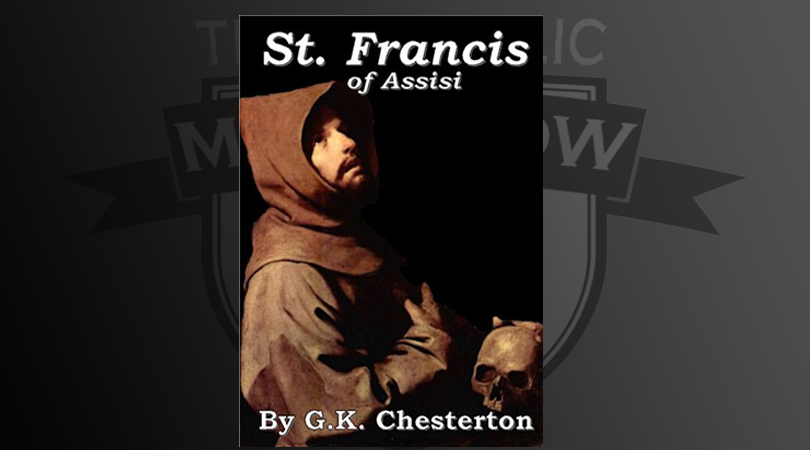 Was your first encounter with St. Francis of Assisi like mine? That is, seeing a statue of an animal-loving monk in a garden or for sale at a home and garden store. Maybe he was depicted in stone or wood, maybe he was a statue only, or perhaps he was holding a bowl to use for birdseed or water. Whatever the case, most of us are at least familiar with St. Francis of Assisi, but do we know him?

For me, reading G. K. Chesterton’s work was not only an experience in humility (due to my lacking vocabulary skills), but was also a test of my patience and persistence. Reading the book took me at least 3 years with some long breaks in between, and a second reading of parts of the book was required to refresh my memory. The book is only 199 pages; however, I found myself sometimes reading the same page twice and making notes in order to follow the story of this saint. As I sat reading with my I pad at my side to allow me to look up the meaning of words, I discovered the story of a man who was not afraid to respond to God’s word without hesitation and was a man “who had ambition to take arms and pursue honor and the practice of chivalry.”

What is not lost in this story is how many of St. Francis’s struggles parallel the same challenges we face today not only in our society but in our personal lives. He attempted to end the Crusades by the conversion of Islam, but it did not work. He was not happy with the order of Franciscans at the time of his death due to their “signs of compromise and a more political or practical spirit in his own order; he had spent his last energies in protest.” St. Francis did not have a relationship with his father, as he had stolen and sold several bales of his father’s cloth (his father was a cloth merchant) and used the money to start rebuilding a church in Assisi. As a result, his father persecuted him and St. Francis lost all social standing. He had dreams and aspirations of storming the battlefield for the military, but due to illness, that did not fully manifest and he returned home humiliated. Despite these adversities, he continued to humbly persevere and was able to “fling himself into fasting and vigil exactly as he had flung himself furiously into battle.”

St. Francis did reconcile, in a material sense, with his father by repaying him the money and by stripping off all of his clothes except for a shirt made of hair and walking off into the snowy woods. He was in a sense “reborn through physical labor” by rebuilding churches, but the relationship with his earthly father was lost. At any rate, the author puts it best by writing that St. Francis had a “final spiritual overturn in which complete humiliation became complete holiness or happiness.” He started his new way of life as a “Jongleur de Dieu,” (fool/juggler for Christ) embracing poverty, chastity and obedience while practicing severe self-discipline and practicing mortifications like fasting, rolling in the snow, and stretching out on the bare ground in the pattern of a cross at the time of his death.

So today, how does the story of St. Francis of Assisi help us to face the challenges in our lives? I submit that we could all learn something from his unwavering ability to be a man of action while maintaining a sense of humor and a practice of being courteous. It is probably too simple to state that the main driving force behind St. Francis of Assisi was his ability of keeping his focus on God’s will. Yes, he had dreams and mystical visions along the way to guide him, but more than that he kept moving forward despite failures and disappointments. He exemplified great trust in God and relied on the logic as Chesterton puts it, “that a friar was freer than ordinary men because as a friar he was free from the world.” That is, he had no need of possessions as those were merely items that would take his focus off the task at hand.

The common depictions of St. Francis of Assisi that we see today are often the previously mentioned garden statues. It seems to me this is quite a paradox because the life of St. Francis was not a stationary, static life, but rather a dynamic life that bore fruit for the kingdom of God. He moved about in the world with courage and determination. It is said that he took only two men with him to try to convert Muslims. Furthermore, when he petitioned the pope to start a new monastic order, he took eleven men along. As the book illustrates, those were small numbers by any standard, but true to form, St. Francis of Assisi continued to remain determined.

Despite his sufferings and physical ailments, (he was blind at the time of death due to eye trouble that was treated with cauterization of both eyes) he was able to remain generous and service minded. He once traded his clothes with a beggar and it is said that the friar “uniform” was the result of St. Francis getting a tunic from a peasant and tying a rope around his waist. His only point of pride was using good manners.

One of my favorite quotes from St. Francis of Assisi from this book is, “Blessed is he who expecteth nothing, for he shall enjoy everything.” How many times in my life have I allowed my expectations to build something up to impossible heights, only to completely miss the joy of everyday life? Simply put, how often have I allowed worldly distractions to prevent me from seeing God’s plan for my life and rob me of enjoying the present moment? St. Francis of Assisi, pray for us, and help us to simplify our lives so we can be men of action!