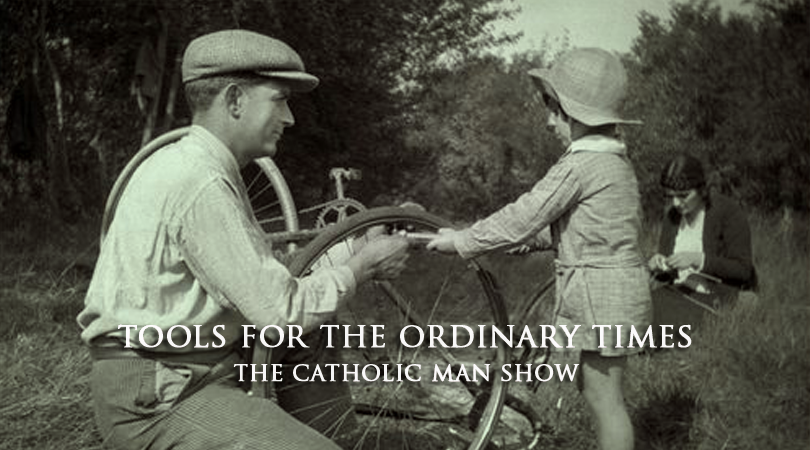 Tools for the Ordinary Times

As the Easter Season comes to an end, and we prepare to celebrate Christ’s ascension from this world into heaven, we can be left with a feeling of sadness. During Lent, we tried to become closer to Christ through prayer, fasting, and charity. Having obtained this new closeness, we watched attentively and grieved as He was embarrassed, ridiculed and humiliated during his Passion. At Easter, we celebrated with Him as He overcame His adversaries and conquered death. Now, as the Lord leaves earth, we’re left like the disciples, staring into heaven and wondering: “what now?” We know we haven’t been abandoned, but we feel removed from those times when He was so close to us as we journeyed with Him over the last few months. This feeling isn’t new for disciples of Christ. In fact, when Christ told his apostles that he was leaving them and going to his Father, he acknowledges that “because I have told you this, grief has filled your hearts.” (John 16:6).

So, now what? Now that He’s going to the Father, and we return to the ordinary grind, how do we move forward with the joy of Christ that we gained at Easter? Luckily, whether we were aware of it or not, since Easter, the Liturgy has been preparing us for this time. Through the last few weeks, the Liturgy reminds us of the great tools given to us for help in these ordinary times:

In the first week after the Easter Octave (i.e., the second week of Easter), the Mass readings focused on baptism. We read of Christ’s discourse with Nicodemus and Christ’s declaration that “unless one is born of water and Spirit he cannot enter the Kingdom of God.” (John 3:5). We know that the effects of baptism are not a one-time occurrence, but through the sacrament, we continue to remain a soul set apart for Him. In times of temptation, or when in need of grace, we should approach the Lord with the confidence of being indelibly marked as one of His own. We should ask Him that, despite our many past sins that have prevented us from being able to receive the full benefit of the graces from our baptism, at this moment of weakness, we may receive anew these graces in order to persevere in trial and holiness.

In the readings for the third week of Easter, we focused on the Eucharist. The Sunday Gospel reading began with the recollection that the risen Lord was revealed to the disciples through the breaking of bread. Later in the week, Christ declared that He, as the bread of God, “gives life to the world.” (John 6:33). As the greatest gift that He left for us, and after having only recently reflected on the institution of the Eucharist during Holy Week in a most pious way, we should return to the Eucharist with an understanding of real necessity— with belief that, without the Eucharist, we will have no life. Do we view the Eucharist in this way—as something just as necessary for us to live as food and drink? If not, we’re either ignoring our Lord’s promise, or we don’t believe His words. We should take Him up on His promise to give us life through the Eucharist during ordinary times.

During the fourth week of Easter, we were reminded that, in a personal and intimate way, our Lord guides us, as good shepherd, to His Father. He didn’t just leave earth and hope that somehow, by our own effort, we would figure out how to get to heaven. He knew we would never make it. Even the apostles who knew him closely and heard His words firsthand failed to understand His message and needed guidance. Luckily, he gives us guidance as well. He actively leads us during times of prayer, during silence and during interactions with holy men and women we know, to Him and His Father. Like a good shepherd, he’s actively working—never distracted, never passive and never losing interest in us. As a shepherd, He gives us guidance. As we leave the Easter season, we should rely on this guidance, and ensure we are well disposed to receive it through living in a state of grace.

Gifts From the Father.

Three times during the fifth week of Easter, we read Christ’s promise that, if we remain in Christ, our petitions will be granted by the Father—“ask for whatever you want and it will be done for you.” (John 15:7). These petitions aren’t for worldly ends, but rather, that we may bear fruit for the good of the Gospel: “By this is my Father glorified, that you bear much fruit and become my disciples.” (John 15:8). Another tool left for us by Christ is the ability to pray in this way, with assurance (based on the promises of Christ) that if we ask Him, God will give us the graces we need to bear fruit in our ordinary lives.

As we neared Pentecost during the sixth week of Easter, the Liturgy introduced us to the Advocate—the Holy Spirit—the one who, in Christ’s words, “will guide you to all truth.” (John 16:13). By His name alone as “Advocate,” we realize the tool that we receive: we have a petitioner to God on our behalf. And, unlike Christ’s message, which was proclaimed broadly to all peoples through the Gospel, the Holy Spirit speaks to us often in a very personal and individual way by revealing truth to us when we need it, and in the amount we need it, all according to the Father’s will. In that regard, we should be aware of this tool of a personal advocate that we received and, accordingly, should ask the Advocate to petition on our behalf for our unique needs.

In the last week of Easter, we are reminded several times that we “do not belong to the world,” (John 17:16), and that, “[i]n the world, you will have trouble,” (John 16:33). Why does the Holy Church leave us with this message as we exit the Easter season? While perhaps more hidden than the other tools, by telling us that we will never be fully accepted in the eyes of the world, we receive confidence. We receive confidence in knowing that, even in rejection, loneliness and isolation in our journey to Him, we’re doing the right thing, and doing what He wanted for us. We should take this confidence with great joy into these ordinary times.

Brandon Watson is a lawyer in Tulsa, Oklahoma.  He and his wife, Roni, have four boys (Bennett, John Paul, Max and Fulton) and attend the Parish of Christ the King.