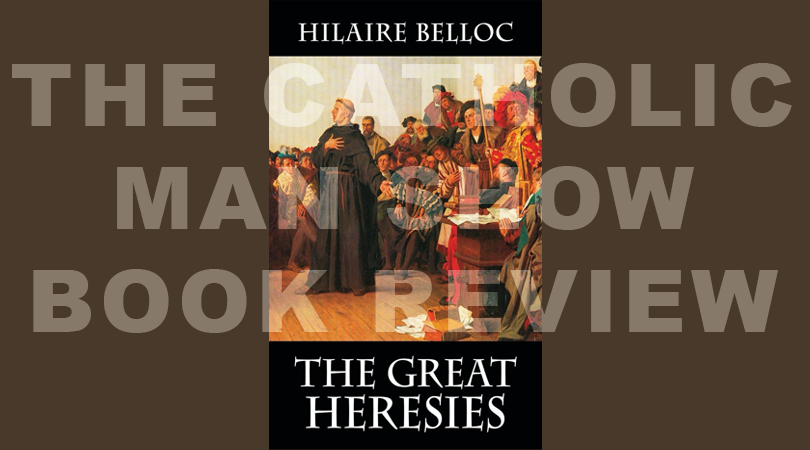 One of my weaknesses is historical reading (for a complete list of my inabilities and limitations just ask my teenage children). It is not that I don’t enjoy historical stories, but I find myself getting “bogged down” in details and dates such that I often miss the point or the big picture. In a rational sense, I know that we can learn a lot by looking at and studying the past. Paying attention to former times can often help us gain wisdom, and perhaps a new perspective, with regard to a current situation. So, who better to learn Catholic history from than Hilaire Belloc?

To be honest, prior to reading this book I had never heard of Hilaire Belloc; however, the back of the book indicates he “was likely the most famous and influential Catholic historian of the past two centuries.” Hilaire passed in 1953, and upon reading his book, I was looking for some keen insights regarding the prior and current attacks on the Catholic Church. He did not disappoint, but I found the read to be quite difficult, requiring me to take more than a few notes. Did I mention historical reads are difficult for me? Anyway, on the official Catholic Man Show technical scale*** I rate this book at a level 9 out of 10 which means the book required considerable time for me to read and much of that time was spent taking notes so I could get a handle on the content. Don’t misunderstand this is a good book, but if you are going to read it allow yourself ample time along with a nice, quiet reading space free of distractions.

The book is divided into seven chapters the first two of which set the stage by explaining the term heresy in the first chapter and then discussing the purpose of the read in the second chapter. The final five chapters are devoted to five heretical attacks made upon the Catholic Church throughout the course of time. Those five assaults as presented by the author are “the Arian, Mohammedan, Albigensian, Protestant, and Modern”. He makes it clear that these are not the only heresies the Catholic Church has faced during the past 2000 years, but he has narrowed these to be some of the main battles that the church has faced up until today. Yes, this book was first published in 1938, but the aspects of the modern heresy, as described by the author, are still visible today.

So, what was the Arian heresy? According to the author the crux of the Arian heresy was that it “granted Our Lord every kind of honor and majesty short of the full nature of the Godhead” such that “Our Lord was everything except divine” and that “Our Lord was nothing more than a prophet”. The Arian heresy began in 300 AD and received its name from a Greek speaking African cleric named Arius and further gained strength by having the Roman army on its side. I had to do a little research for clarification and according to Catholicnewsagency.com the flaw in the Arian heresy was as follows: “According to Arius, the Son was created by the Father and not Divine as the Father. Arius’ main error was that he imposed time on the eternal (timeless) nature of God.” The first major defeat suffered by the Arian heresy occurred at the council of Nicea in 325 thanks to St. Athanasius, but as a result of that setback, the heresy learned from the downfall and actually gained strength. Eventually, the Arian heresy died out over a time period of approximately 300 years as presented by the author.

The fourth chapter of the book is titled “The Great and Enduring Heresy of Mohammed” and during this part of the book the author unpacks the faith of Islam and how it began. This particular chapter is the second longest in the book stretching 42 pages and presents two main reasons the heresy has not disappeared: “1. It did not arise within the Church and its founder was not a Catholic” and “2. The body of Islam attacked Christendom from beyond its frontiers, instead of breaking it up from within.” If you need some further evidence on the attacks from Islam from outside the borders of the church you may want to check out The Catholic Man Show Episodes on The Battle of Vienna #178 (The Winged Hussars and 9/11) and The Battle of Lepanto #183.

According to the author, “Mohammedanism began as a heresy, not as a new religion starting in A. D. 634, and striking a mortal blow against Catholic tradition by fully denying the Incarnation.”  Mohammed “sprang from the pagans and taught an oversimplified Catholic doctrine” which capitalized on a society that was suffering from “slavery, usury, and heavy taxation.” Hilaire lays out many details about Islam during this chapter and further states that Islam is “indestructible because it is founded on simplicity and justice and has maintained those Christian doctrines which are evidently true and which appeal to the common sense of millions, while getting rid of priestcraft, mysteries, sacraments, and all the rest of it.” He goes on further to state that “Islam is apparently unconvertible.”  Of course, we cannot see into the future to note whether there will ever be a major conversion back to Christendom from Islam, but in our current world Islam is obviously still present.

During the Middle Ages, another heresy was formed and the author refers to it as “The Abligensian Heresy”. By A.D. 1167 the “Albigensians were fully organized as a counter-church” and the movement spread based on the following thought process based on the prospect of two gods: “Our bodies are material, they decay and die. Therefor it was the evil god that made the human body, while the good god made the soul. Hence also Our Lord was only apparently clothed with a human body. He only apparently suffered. Hence also the denial of the resurrection.” This heresy was mainly prevalent in France and came to a head during the battle of Muret on 09/13/1213 and on that day the Catholic fighters “heard Mass in the saddle and that mass was sung by St. Dominic.” The Catholic force was victorious in battle and over time the Albigensian Heresy died out.

The longest chapter of this work is dedicated to the reformation, which as we all know, led to Protestantism. I was raised in the Lutheran church, but quite frankly I have never really studied the reformation. Yes, I realize now that Martin Luther gave birth to the faith of my youth; however, I never realized that before he posted his theses in 1517 that he was Catholic. Further still, I did not understand until reading this book that, as the author points out, the reformation can be divided into two segments. To be honest, I have read and re-read portions of this chapter in order to present it well for this review, but I still feel I am in the limited knowledge stage with regard to the roots and chronology of the reformation.

I am confident that the author was not trying to confuse the reader with regard to the reformation which led to Protestantism, but it seemed his presentation jumped around a bit with regard to time which made the subject matter difficult for me to follow. Anyway, the author points out that the origins of the reformation can be traced back to the years of 1307-1377 when “the Papacy abandoned Rome for Avignon” which the author states “weakened the Church” and also the stress placed on society both physical and mental related to the plague in 1348-1350. Next the author outlines what he states are the “two epochs” of the reformation the first being an “epoch of universal debate and struggle” within the Church which was a span of about 80 years from “approximately 1520-1600” and the second being an “epoch of clearly opposed forces that were sharply divided into hostile camps.” In other words, the first phase was an argument within the Catholic church and the second phase was a “conflict between Catholic and Protestant” divisions.

As time moved forward from the second epoch of the reformation, battles ensued which the author describes as “fierce civil wars” of which there was no clear winner between the two groups. As you might imagine, the author does explain the significant role that Calvin had in progressing Protestantism and the author states that “Calvin was the driving force behind Protestantism with his book appearing in 1536.” Of course there are many other details presented in this lengthy chapter; however, I think the author sums up the unfortunate fruit of Protestantism best by stating “The whole tone of mind in that society (Protestant society) called every man free to judge for himself, and the one thing it repudiated and would not have was the authority of a common religion.”

The final chapter of this literary work is titled “The Modern Phase”. One of the most interesting aspects of this chapter relates to the original publishing date of this book which is 1938, but one could argue that he was writing this today. The author describes “The Modern Phase” as a “wholesale assault upon the fundamentals of the Faith, and the enemy now advancing against us is increasingly conscious of the fact that there can be no question of neutrality.” In other words, the battle lines are clearly drawn and “our civilization, which has already ceased to be Christian, may lose its general Christian tone altogether.” Despite the challenges the Catholic Church is facing during this “Modern Phase” the author is quick to remind us, “we know, of course, the Catholic Church cannot be destroyed,” and gives us further hope by stating, “there is the fact that all through the centuries the Church has reacted strongly towards her own resurrection in moments of deepest peril.”

As I age and as I watch my children grow up and leave the home, I seem to come up with more questions than answers. What will the future look like for my family and my Catholic Faith? What type of legacy will I leave behind when my earthly time is up? Did I do all I could for Christ during my time on earth? Insert your own questions here. Despite my questions, I think Hilaire posed a pressing thought, which warrants attention, during the last paragraph of his book and that thought is “Thus are we now in the presence of the most momentous question that has yet been presented to the mind of man. Thus are we placed at a dividing of the ways, upon which the whole future of our race will turn.”

← Christmas Gift IdeasA look back at 2019 – Guests and Episodes →